Despite a wintery Melbourne afternoon, crowds gathered to see the launch of the Outdoor Gallery's National Reconciliation Week 2018 exhibition.  Bolstered by hot chocolate provided by Fair Food Challenge, supporters of our Indigenous student artists gathered to see the unveiling of the exhibition and hear the stories behind the works.

And the students did not disappoint, presenting a series of captivating, moving and evocative works expressing the unique identities and experiences of the individual artists.

Following the successful launch of the Outdoor Gallery during National Reconciliation Week in 2017, this year’s exhibition features artwork created by University of Melbourne Indigenous students with mediums spanning across painting, wood burnings, photography and graphic design.

The launch of a new Outdoor Gallery exhibition showcasing the creativity of Indigenous students is now confirmed as annual event during National Reconciliation Week into the future.

The exhibition opening was followed by a screening of Indigenous art films. As part of the New Student Precinct Project and Next Wave Partnership, the film screening was the first of two events showcasing a variety of moving image works by First Nations artists and filmmakers. The works explored issues ranging from historical and present-day exploitation, dispossession, violence and inter-generational trauma; the ongoing legacies of colonial fantasies and stereotypes; cultural identity; and the struggle for sovereignty.

The screenings were powered by the Pedal Projections, a mobile projection cargo trike that brings stories and events to life through light, sound and film. The custom-built trike creates stunning and eye catching visual displays that converts public places into immersive and engaging works of art. Pedal Projections is a product of the New Student Precinct’s student engagement with the Victorian College of the Arts in support of VCA 150, a project that is collating and curating 150 years of VCA graduate films dating back to 1967.

Images of the event can be seen in our online gallery. 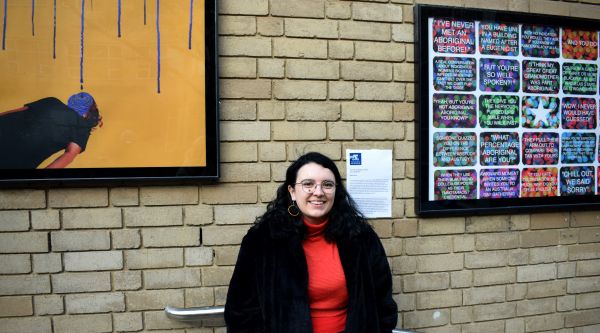 Pierra Van Sparkes is a Kulin country based Pibbulman artist. Her work is inspired by the shared history, feelings and encounters that shape lived experiences of Aboriginality amidst a diverse range of Indigenous identities. Working with photography and digital media, she aims to interrogate mythscapes that inform notions of Indigenous authenticity and the modes in which these notions manifest. Her work has featured in The University of Melbourne’s Under Bunjil magazine, Manningham Art Gallery’s Badjur - Bagarook - Yorga – Woman, and at the Koorie Heritage Trust’s Koorie Art Show, taking home the 2016 RMIT University award and the 2017 Moogji Club People's Choice award.

Digital Media (seen to right of above photo)

‘This piece pays homage to my late Nan, Jocelyn Websdale, with whom my cousin and I would spend countless hours in country social clubs and community halls playing amongst the curtain-lined walls, making ‘dot paintings’ with bingo daubers and, if we were too boisterous, distracting Nan from her winning numbers. She was quick and focused, however, so we rarely got the better of her. She loved a good laugh, and no one else got the better of her. If you don’t laugh, you’ll cry she always said. She knew how to play the game, and when she wasn’t winning, there’d always be a smile and a knowing look that the next game was hers.’

Photography and Digital Media (seen to left of above photo)

‘While the colonial fallacy of this land mass being terra nullius, or nobody’s land prior to European invasion is now formally rejected, Aboriginal sovereignty continues to be troubling for many Australians. As such, the sentiments of terra nullius echo in every corner of the continent, from courts to classrooms, and even the minds of our first peoples. While resisting the literal and figurative erasure of our people throughout the ongoing colonisation of our land, we must also resist the colonisation of our minds. Sometimes the thoughts seep in though, and a trickle can become a well.’ Moorina Bonini is a proud Yorta Yorta woman and member of the Dhulunyagen clan. Her works are inspired by her own experiences as an Aboriginal and Italian woman, using her practice to create artwork that examines contemporary Indigenous histories through the use of video art, photography and installation. She is currently studying at the Victorian College of Arts doing a Bachelor of Fine Arts (Honours) in Visual Arts.

‘The Pioneer, 1904 is an artwork I am familiar with as I grew up with replicas of these paintings that belonged to my Nonna. I have taken the paintings from her house, the house that I still live in, and I have painted over them using a material that was heavily used by colonisers to document Aboriginal people and their culture. Through the process of repurposing traditional paintings and reconstructing their original intention, I aim reclaiming the colonial narrative.’ 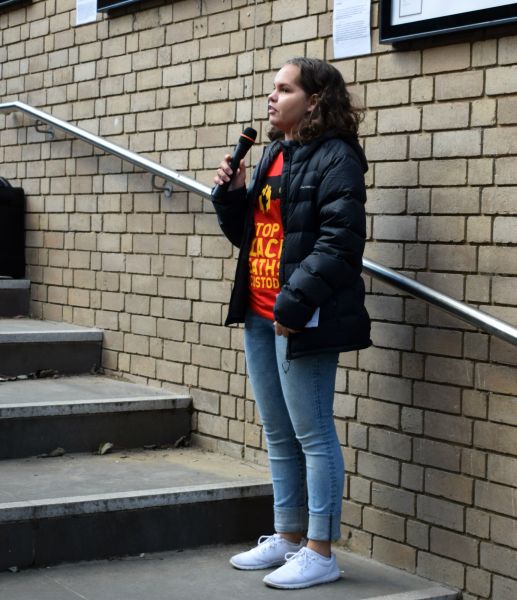 Serena Rae is a proud Mamu Waribarra woman from Far North Queensland, up on the Tableland region. She is currently majoring in Creative Writing, with a minor in Australian Indigenous Studies. You can find some of her poetry and commentary published in Under Bunjil, SBS and NITV. Serena hopes to find a career in editing and/or publishing, and to cement the presence of Indigenous people in the literary world, both creatively and academically.

Serena performed two of her poems at the opening of the exhibition. They are reproduced here with permission from the artist.

blue eyes black body
half-caste ocatroon
this one drink, he do study
gonna get locked up soon
too many time dad hit mum
no surprise that system hit him
boy working hard for a crumb
suicide bubbles under the brim
backwards caps and empty bottles
no education to be expected
innocence is beaten and throttled
from culture boys and men disconnected
bodies weighed down with assumption
blackness existing for white consumption

Ode to my mother tongue 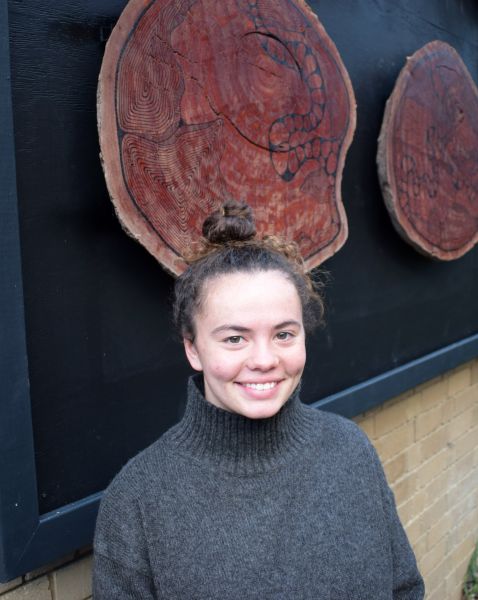 Tarryn Love is a first year Bachelor of Arts student at the University of Melbourne. She is a proud Gunditjmara Keeray Woorrong woman from Western Victoria. She has a strong passion for art that reflects her Aboriginal heritage and culture. Love is highly motivated to explore, relearn and invigorate traditional practices which she attempts to incorporate in her art in a hope to create awareness and recognition of culture.

‘This piece recognises and acknowledges the traditional owners of the land, the country which we stand on now. The five red gum cross sections demonstrate each nation that makes up the Kulin Nation, Djadjawurrung, Taungwurrung, Wathawurrung, Woiwurrung, and Boonwurrung. This work is a symbolic map of each clan’s country in an abstract sense. The outline shape indicates the boundaries of the land, and the concentric lines represent time and age to emphasise how long this country has been and always will be traditional land. Additionally, the lines also symbolise meeting and gathering that signifies the community sense of our people. I have also highlighted each major river that runs through the nations, except for Boonwurrung as it borders the ocean. It is crucial to know the owners of the land we walk on every day as it is the first step in recognising the traditional custodians.’ 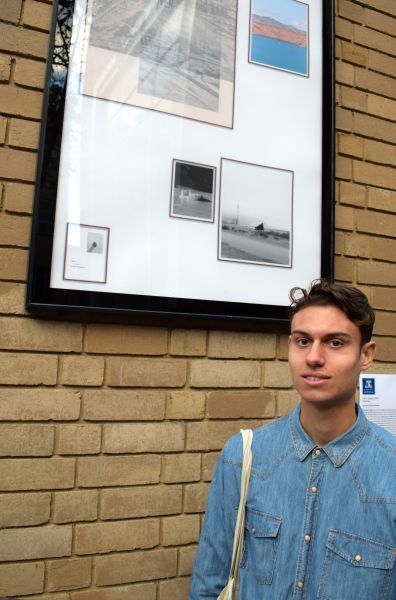 Jake Almeida is a first year Bachelor of Fine Arts student majoring in Photography. His practice specialises in the field of documentary and reportage. Almeida has produced multiple works that explore the mistreatment of many Indigenous communities in the Northern Territory through his project Desolate Sanctuary, 2017. He explores the themes of isolation and a lack of government funding in that project. Almeida’s most recent work touches on the global issue of the theory behind an individual’s internal neglect as a catalyst for the planets current declining state.

‘The series, within a rise, there lies a scission, 2017-2018, touches on not only humanity’s past but also our future. Suggesting a direct index between not only the comportment of past generations, but also the rise of internal-neglect/self-respect and its correlation to humanity’s detrimental mistreatment of the planet.’